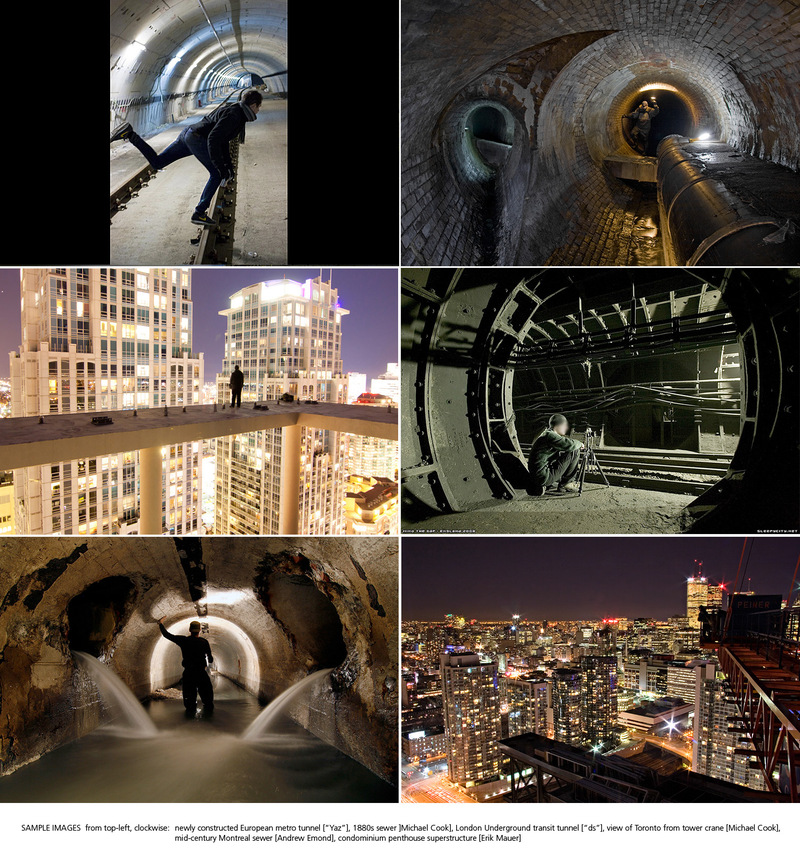 Set of sample images from a range of photographers.

The activities and cultural contributions of self-described 'urban explorers' have become influential in how public and professionals view, imagine and act upon cities. Through risk-taking photography, urban explorers have popularized views of industrial and institutional ruins, of underground infrastructure ranging from Victorian sewers to hypermodern transport tunnels, and of city skylines seen from new condominium and office towers or from the rickety tower cranes erecting them. The influential aesthetics of urban exploration have shown up everywhere from major films and video games, to sanctioned tourist activities as in the Toronto CN Tower's Edgewalk attraction, to the public communications of utilities like London's Thames Water.

As hobbyists, and occasionally as artists and researchers (like this author) operating at the margins of professional practice, urban explorers rely on circumstance, trespass and active intrusion to experience and craft images of places that would otherwise be off-limits. Fences, locked doors, manhole covers and the physical walls and ground of the city are routinely described as barriers not only to personal experience, but to popular imagination and understanding of urban ecologies, histories and futures. Some academics have attempted to ascribe a more revolutionary content to these trespasses: as challenges to surveillance states, as admonishments of the consumer economy and social regulation, or as reappropriations of the ruins of deindustrialization; urban exploration has also been critiqued as immature, male-dominated, and as a selfish practice that has little ambition to expand public knowledge, access and authority over the places being 'explored'.

Arguably, the images themselves have been the most transformative aspect of the practice. In many of the most widely-circulated images, we find an enveloping portraiture of the explorer's body, imposed on structures and spaces and views in and on which it very clearly does not belong. Architecture and engineering have always had a complicated relationship with human bodies and with the 'human measure' (whether that of Heidegger or of Henry Dreyfuss); this is perhaps nowhere more evident than in the dense urban cores that offer the most engaging stage for explorers' photography. The subversion of dwelling and polis to the commodity efficiency of real estate and to the rational management of institutional security and public service provision has meant a proliferation of un-peopled architectures within cities, where the provision of social functions now produces anti-social space and structure.

Images of the human figure embedded in-tunnel and poised impossibly atop roof and scaffold re-measure those spaces, and bid questions about their reintegration into the city's human landscape. A delirious imposition of the figure onto skyline and sewer alike, urban exploration is an architectural posture, one that celebrates the beauty (and the scale) of architecture and engineering's technical achievements, while simultaneously rejecting the anti-ergonomic superstructure of the cities that they have built. Through images, the explorer's act of being present in unpresentable places suggests their potential to accept a public and to support the same politics of social care, responsibility and investment that accrue to other spaces (parks, neighbourhoods, schools, arts and culture facilities).

The article will be organized in two parts. Part A will expand the theoretical discussion presented above. Part B will present capsule discussions of five infrastructural places (Sewer, Crane, Canal, Power Station, Transit Tunnel): documenting the transgressive entry of urban explorers into these structures and the transformative influence of their presence and photographic accounts. Photographs by a number of well-known practitioners (including the author), along with screen captures and reproductions of public communications, videos and other media, will accompany the text.