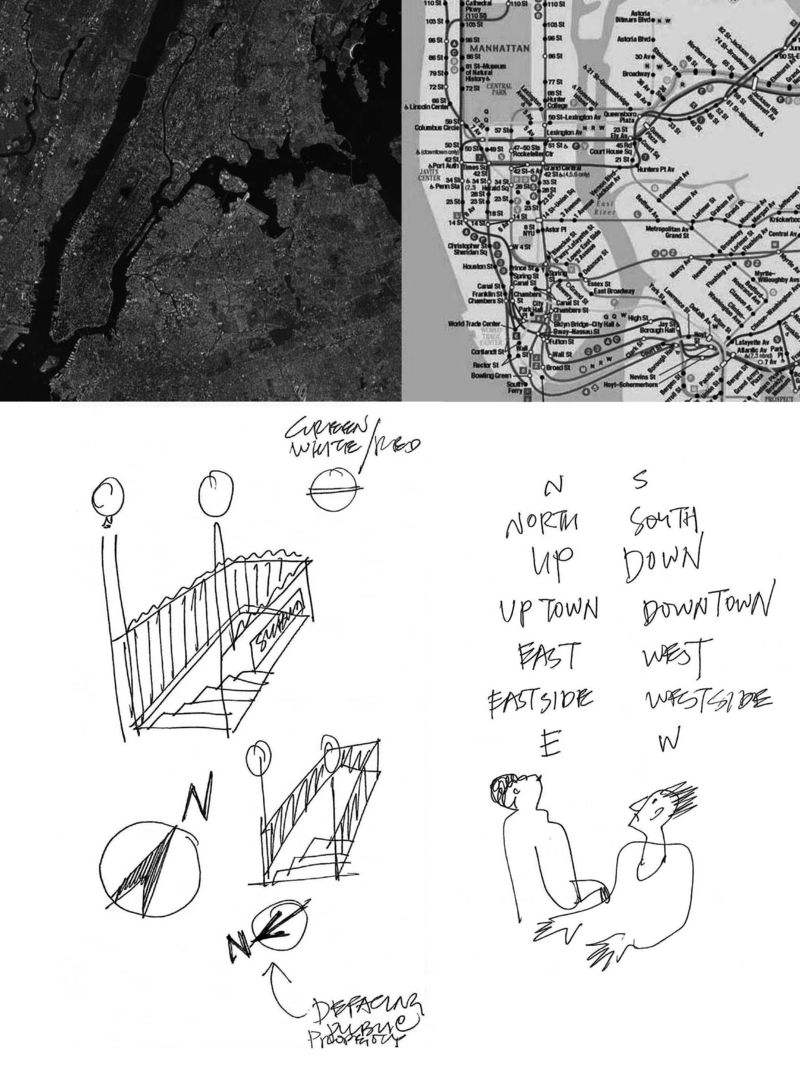 01. city map vs. subway diagram and problems of re-orientation

In November 2008 The New York Architecture League announced a 48-hour design activism challenge – calling designers to start actively shaping public space in NYC. The ‘New York community’, the public, populus, the “New Yokaz”, the very individuals who use the public space, is a large yet ephemeral entity. Where can this community be observed on a daily basis and on a short notice? The New York City subway system -- or precisely the moment where the subway ends and city begins – the subway station entrance, is where millions of New Yorkers can be seen daily emerging from below ground in nearly 500 stations. Re-emerging into the city through a subway station is transformative – it is a link between an abstraction of subway lines and real urban geography, a kind of a daily rite of passage, the ultimate public space. And as we found, it is often confusing even for a “seasoned” New Yorker, much less for a visitor, because the standard NYC subway entrance fails to re-orient the traveler back to the City.

We began considering the language of way-finding appropriate to the boundary between subway and the city. Other cities often introduce a north arrow, either embedded in the pavement, or attached as a sign. In NYC, however, both local residents and tourists rely on the idea of “up” and “down” to orient themselves within the city, and use iconic landmarks serve as primary way-finding devices. "New York, New York, a helluva town. The Bronx is up but the Battery's down" – in his 1944 New York, New York Leonard Bernstein captured the essence of local vernacular way-finding – the landmarks are equated with cardinal directions. Yet there was a missing piece. For thirty years, until 2001, several generations of New Yorkers consider the Twin Towers of the World Trade Center as ‘down’. Since then, there has been no substitute yet. The clunky Freedom Tower, finally topped off in 2013, has yet be domesticated into the New York way-finding vernacular (if it ever will be), and a generation has grown up without a familiar double stub of the World Trade to reliably point out the downtown upon the brief confusion in the first seconds on the city ground post-subway-ride.

Furthermore, the destruction of the WTC was that kind of an event that made New York a community – the type of transcendental occurrence, politics and other consequences aside, that brought many ethnicities, classes, generations together, at its best as a simple notion of allegiance and belonging, without any undercurrents of pathos, ideology, hubris or hatred. In itself, autumn of 2001 was a somber but beautiful time in New York – saddened by the tragedy, but emboldened by the palpable emergence of the spirit of the City. That was worth remembering!

48 hours later, a visual reminder for the missing downtown landmark of the WTC towers went up on and around 23rd St N, R station one night in November of 2008. Directional signs pointing toward Ground Zero served both as a functional way-finding device and as a distributed memorial to the spirit of New York City. Lost in the cacophony of NYC street signage, we imagined these devices deployed throughout the city, infiltrating the infrastructure of information. The two prototypes lasted nearly two months before NYC DOT and MTA finally took them down. 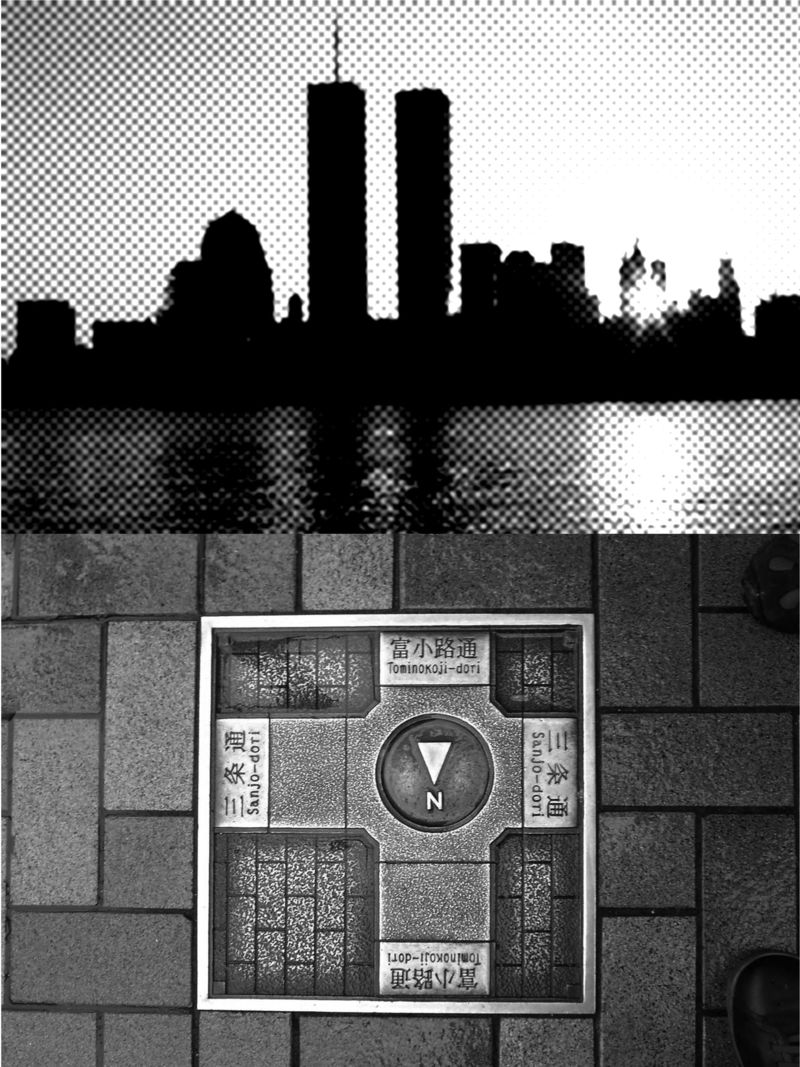 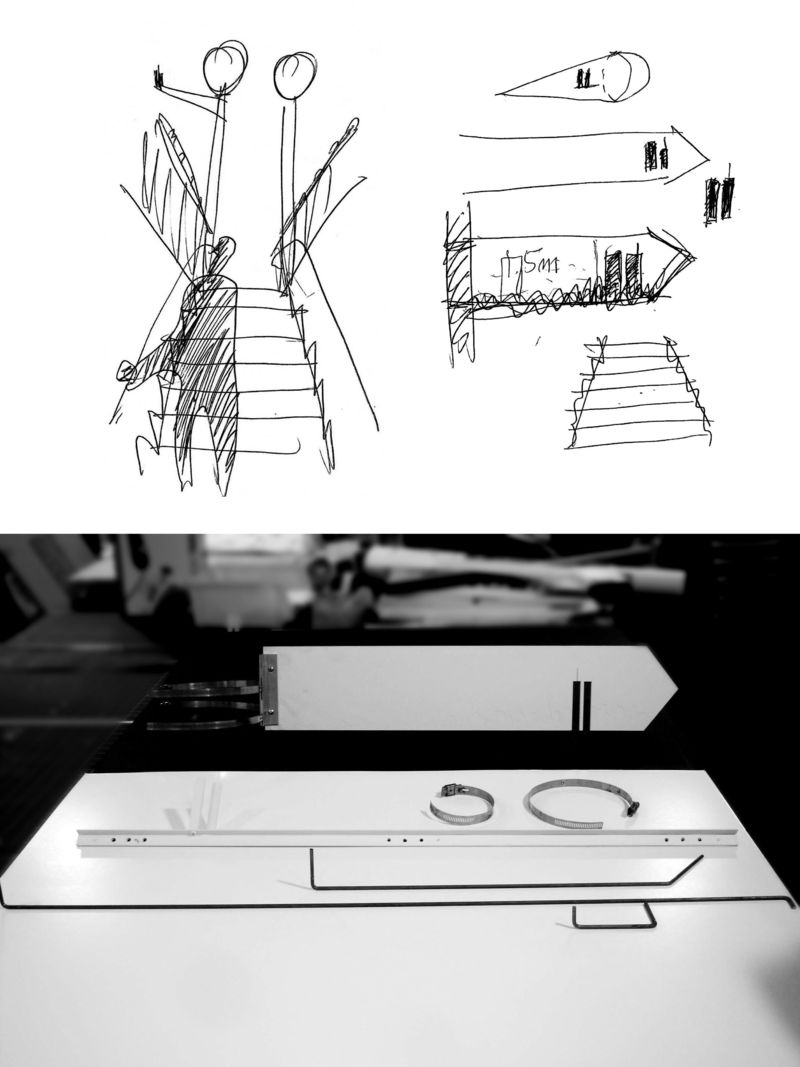 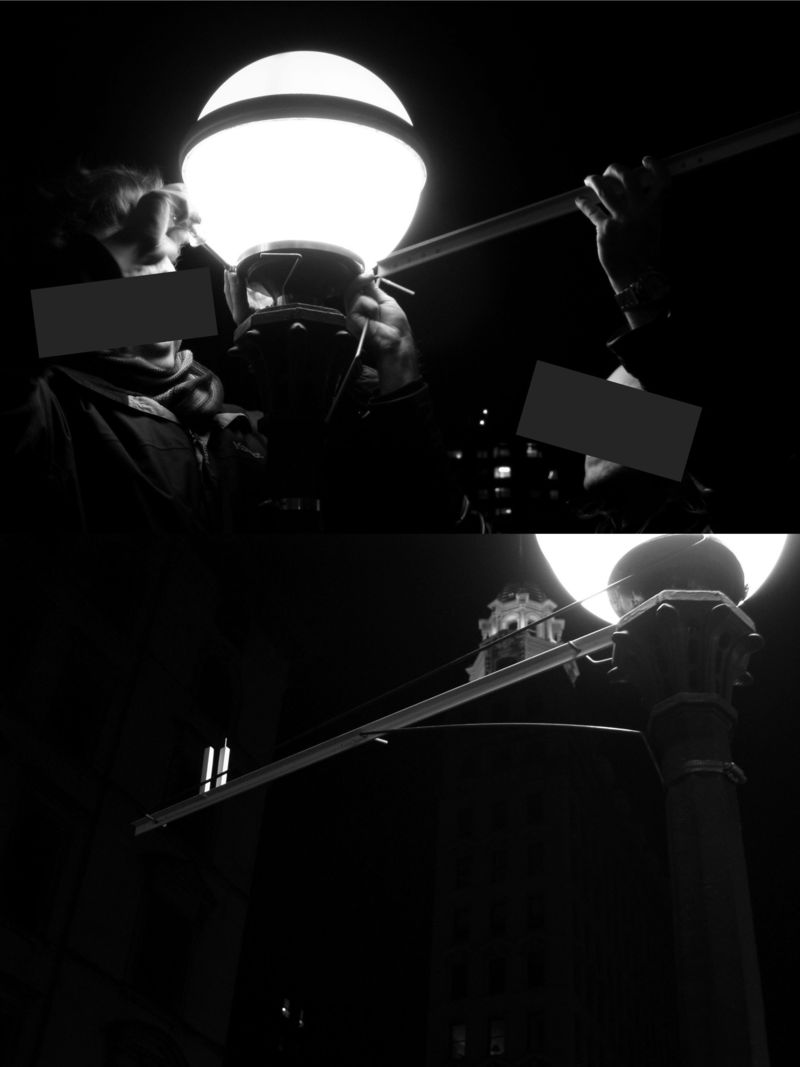 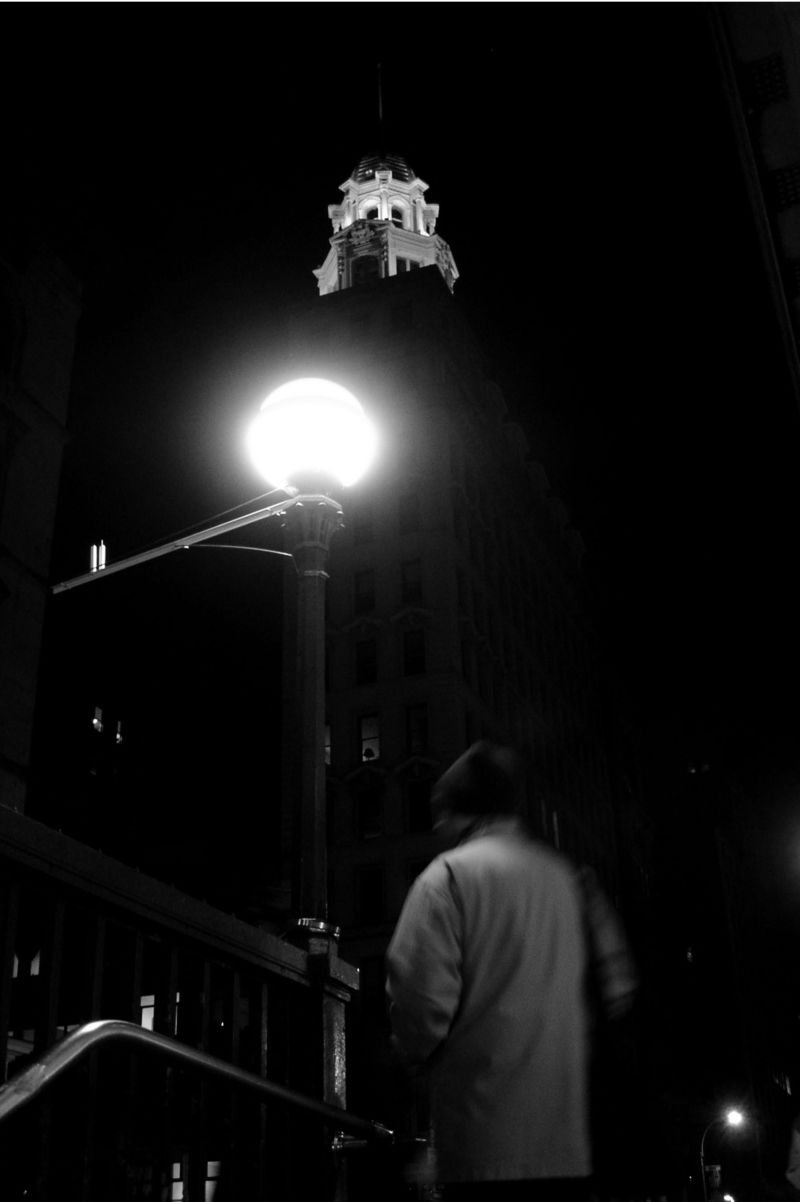 05. downtown is that way, where the WTC was 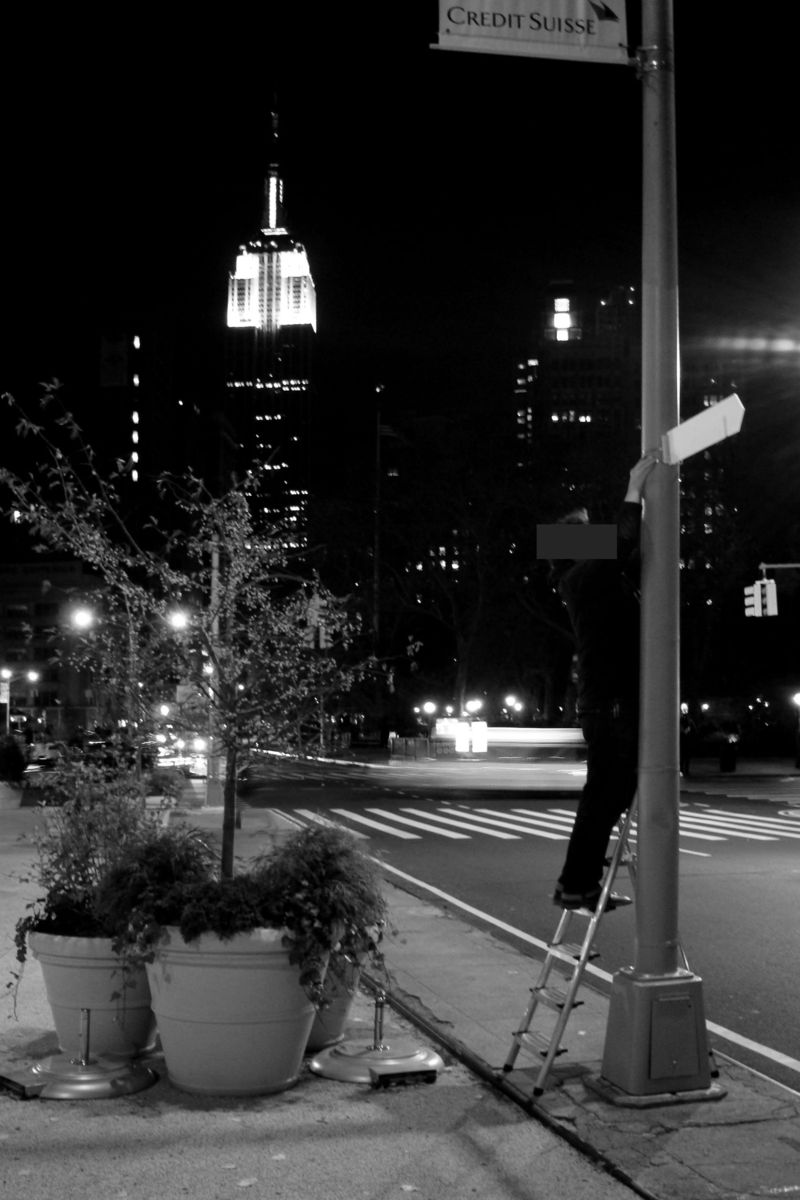 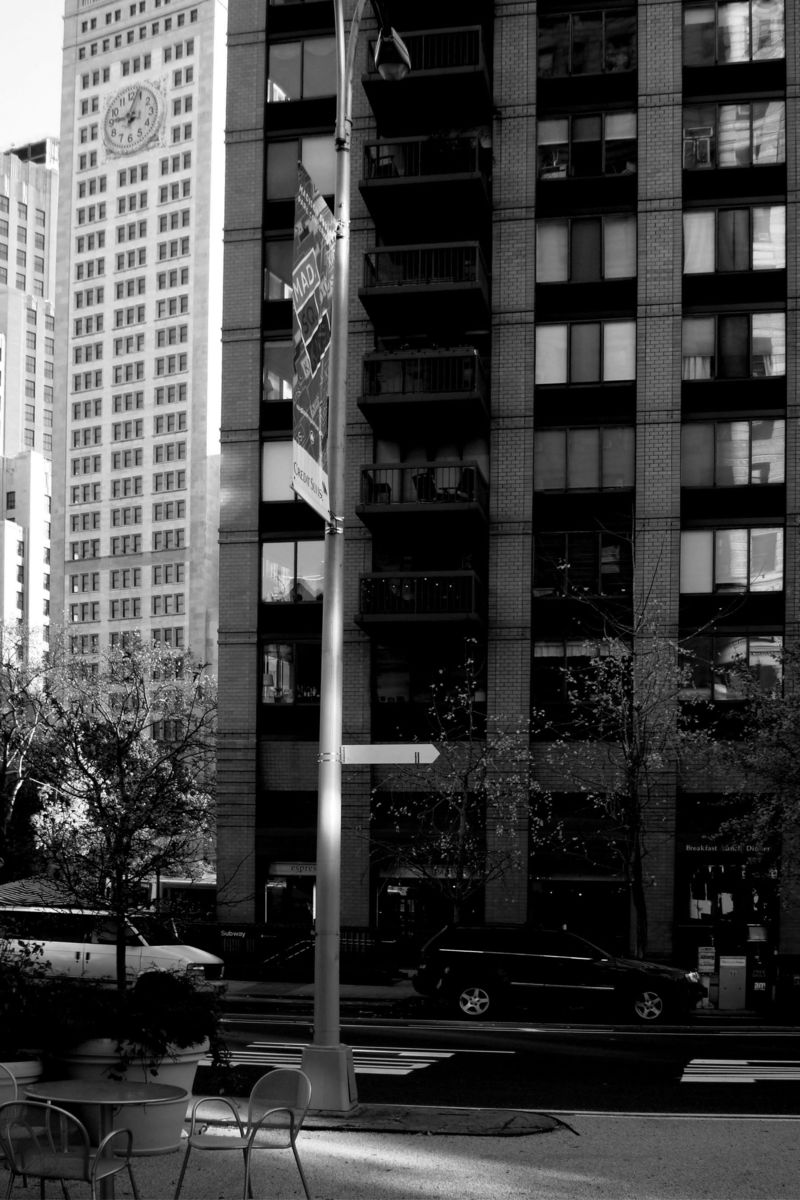 07. downtown is that way, where the WTC was 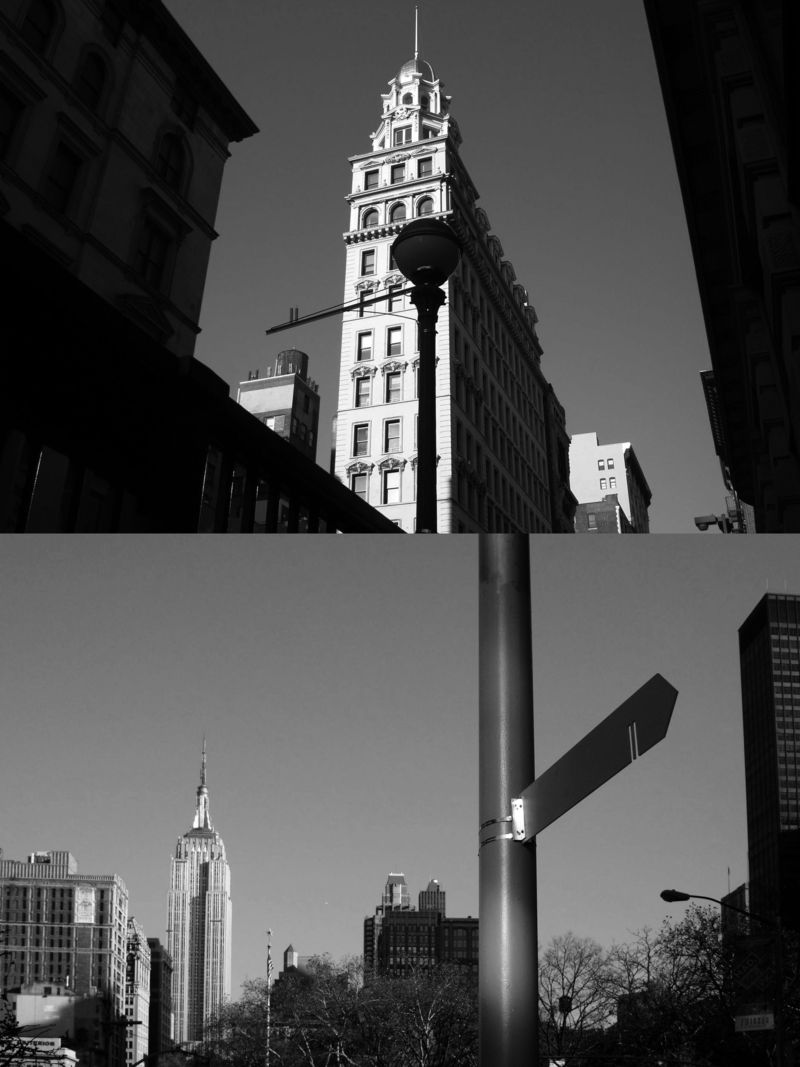 08. up for 2 months, lots in the sea of NYC signage infrastructure