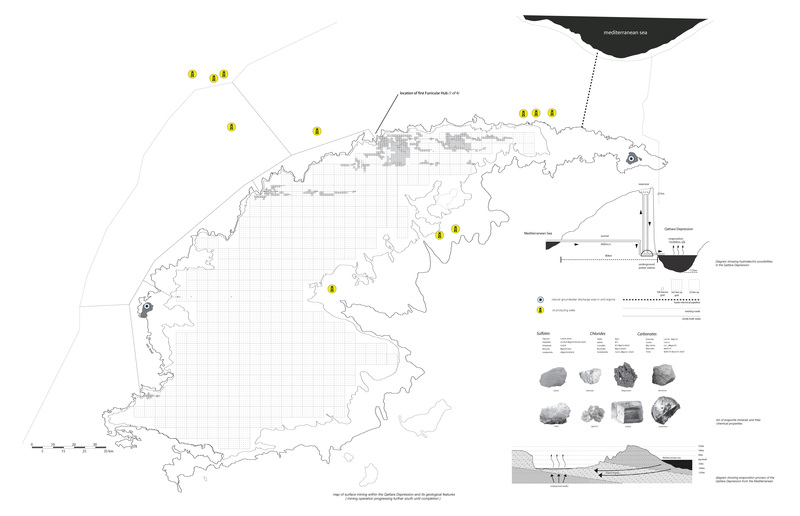 The genesis of the Empty City came from a Central Intelligence Agency document which suggested that flooding the Qattara Depression would bring stability, an altered climate, and economic development within northern Africa and the Middle East during 1957. This public works project conceived on a massive scale, if-well choreographed could reshape urban and rural development within the neighboring regions.  The site is situated within the Qattara Depression of the Eastern Saharan Desert 134 meters below sea level. The objective of the intervention will focus on surface mining and exporting the rich mineral deposits. These basic ingredients would be used to condition soil as agriculture is the catalyst for developing and sustaining surrounding regions. This Depression and the nearby Mediterranean Sea were once a single large Prehistoric lake 6 million years ago and the evaporative process over several millennia has left a rich mineral deposit along the surface of the Depression. Eventually the Empty City would respond with a hydroelectric infrastructure.

The terrain and the climatic conditions of the Qattara Depression form a natural border, a hostile environment that has historically discouraged human intervention. The Empty City will be catalogued during a span of 200 years showing the primitive beginnings of the settlements to the fully mechanized mining operation. However, it will prove to be a nomadic endeavor. With no sense of permanence or stability of life, the working inhabitants are effectively gathering the mineral resources at a given place through surface mining and then moving on. In time, the industrial complex in the Qattara Depression will become an empty and abandoned city. The architectural artifacts of the nomads will be eventually swallowed by the expanding desert.