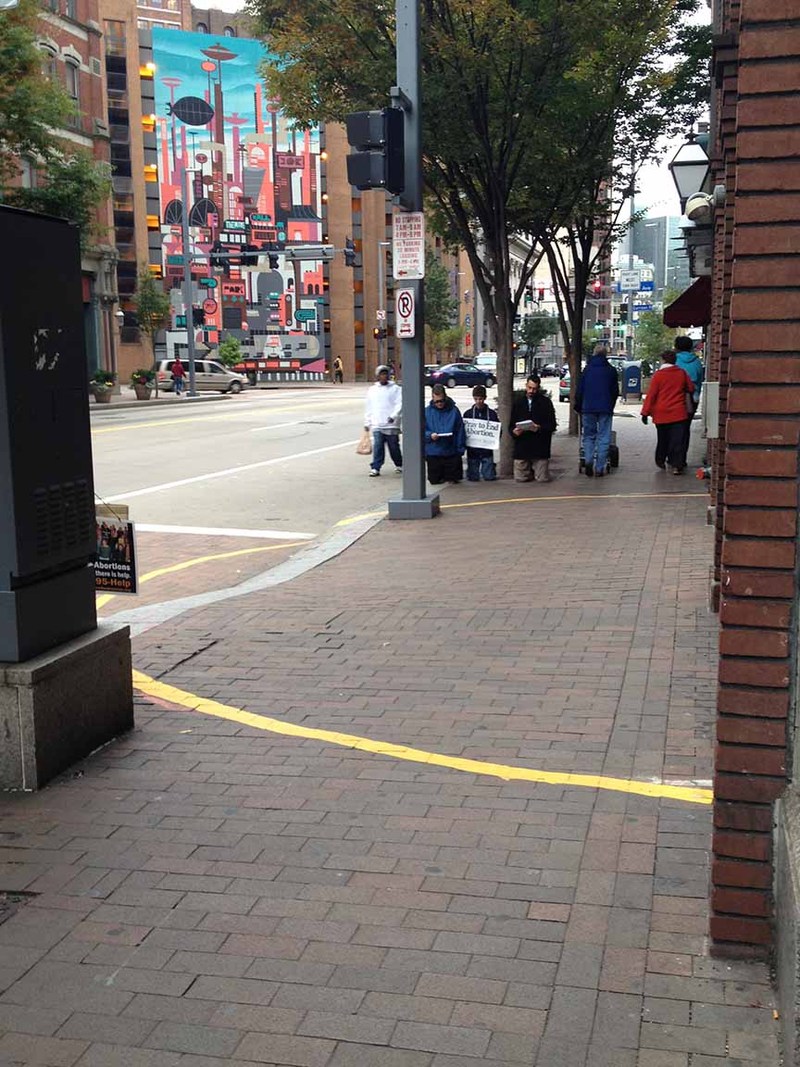 The research discussed in this essay begins with an inherently politicized space to think through some of the repercussions of just such relationships.[i] When considering what spaces are inherently contested and politicized, abortion clinics seemed like an obvious choice. Integral to abortion is how clinics intersect with public space and the First Amendment of the United States Constitution guaranteeing an individual the right to freedom of speech and peaceful assembly.[ii] As polarizing an issue as abortion is in various parts of North America, abortion provides an interesting platform to think through complex relationships of space, the autonomy of a body in space, varying degrees of governmental control and the fluid and ever-shifting geography of reproductive healthcare access. The focus on the spaces of abortion emerged from the desire for architecture to be political, something it is not good at being, and to deal with issues that are inherently politicized within contemporary culture. Another motivation for the research is to reinsert architecture back into contemporary culture and the built environment of everyday space. Implicit within this work is to hold architecture more accountable in provoking change both out in the world and within the discipline.

A related series of questions one may ask include what is the value of design thinking for the greater public in terms of abortion and public space? What role could architects have in exploring overlooked spaces like abortion clinics and engaging in their design and security? How can design positively impact access? Although not explicitly aligned with the types of non-places theorized by the anthropologist Marc Augé, reproductive healthcare facilities have a certain affinity coinciding with what as he states “[n]on-places could be seen, approaching them from another vantage point, as the heirs to everything that has created discomfort or annoyance in the history of human spaces.”[iii] Although the spaces of abortion are not the creator of discomfort, the idea of these spaces and what they represent definitely fall within this categorization and the physicality of their existences clearly create discomfort for a large segment of the population.

One of the initial issues that drew me to this research was the intersection of a highly politicized and charged space being contested out in the public realm. Public space is critical in different ways for abortion clinics. Anti-choice protestors regularly exercise their first amendment freedoms by protesting out in front of abortion clinics across the United States. This right is part of the freedom individual citizens of this country have to publicly speak out against issues one is against and anti-choice protestors are protected under law to be able to do so. State and federal courts have ruled both in support and in opposition to certain abortion rights cases weighing free speech against abortion access. This has produced a variety of legislation differing dramatically from state-to-state controlling and manipulating the actual geography and physical boundaries around clinic properties, buildings and people’s bodies.[iv] This remains ongoing and just this past January 2014 the Supreme Court heard arguments challenging the constitutionality of the 35’ buffer zones around abortion clinics in the state of Massachusetts.[v]

[i] This essay is part of a larger research project recently published in Contested Bodies: Abortion Clinics, Women’s Shelters and Hospitals (Ashgate 2013).

2. Role of public space in research

a. discussion of some political theory literature including Jurgen Habermas, Nancy Fraser and Iris Marion Young

b. the public / private dichotomy and why this is problematic

c.  how abortion clinics intersect within public space; where can agency be legible

a. role of design within build environment

b. Elizabeth Grosz asking how to think architecture differently – how do spaces of abortion provoke different possibilities?

b. state restrictions and spatial implications