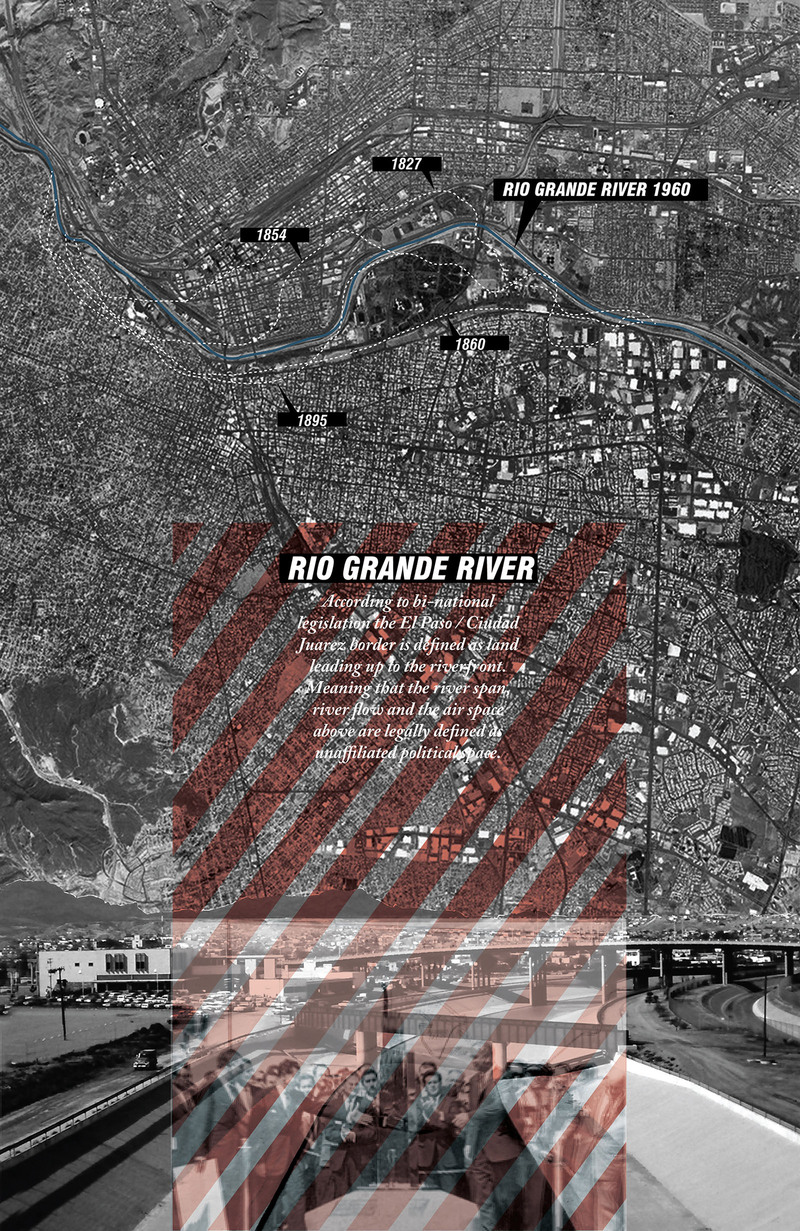 BORDERLANDS: An Exploitation of the U.S. / Mexico Political Geography

The border cities of El Paso and Ciudad Juarez lie next to one another estranged. Once a single thriving community now severed by the U.S./Mexico political geography. The boundary between the two cities is not an abstract line on some map but rather the Rio Grande river. A powerful river that now flows through concrete channels built to put an end to the rivers natural habit of shifting course and blurring the boundary.

Since the outbreak of the Mexican Cartel war the border/river has been sealed - severing what used to be a strong and vibrant bi-national community. The violence has strangling an economy largely dependent on transborder foot traffic. The abandoned homes left behind by citizens fleeing to safety has become the breeding ground for the cartel’s colonization of the U.S. / Mexican borderland. As a result, the Rio Grande runs dry due to a system of upstream levees holding line between El Paso and Ciudad Juarez.

The following actions seek to subvert and reconfigure the representational character of RIo Grande as a structure of the border and uncover extraterritorial space that is unaffiliated with the geopolitics. This shall be a space of usership rather than ownership. An exploitation of the rules that divide.

Currently the Rio Grande River represents a dividing line that cripples a region, community and its interdependent economies.

1. IDENTIFY the regulated river system and the abandoned structures colonized by the cartel.

2. EXPAND the border it into an extraterritorial space by subtracting the levees and flooding the river.

3. When the river surges, MULTIPLY the Rio Grande River into tributaries and flood the sites colonized by the cartel thus uncovering more extraterritorial space.

The border/river will now become ubiquitous loaded with countless moments of crossing and overlap. This removes the significance of the politically charged river. Now the territorial reconfiguration will instigate acts that transform the CARTEL SPACES currently existing along the border.

1. EXPOSE the inner spaces within so they are no longer hidden from the public by subtracting the walls parallel to the streets.

2. DECOLONIZE the cartel by removing the ground they operate on with the flowing Rio Grande tributaries.

3. By flushing out the cartel these spaces can now act as channels forging new UNAFFILIATED spaces within a field of river tributaries - allowing new programs and an unfettered access between the two cities.

With these operations set in place the border is no longer black or white, American or Mexican. Rather these actions instigate a new gradient of territory in an attempt to diversify the occupation of the borderland. No longer a space of political subjectivity the river now offers new moments of interaction and exchange amongst the two cities. The border will always exists however what these actions produce is an experience that will not affirm the border - enabling new modes of subjectivity at the border outside strictly national and ethnic affiliations.

Territorial Operations are employed to subvert the Rio Grande and uncover extraterritorial space. 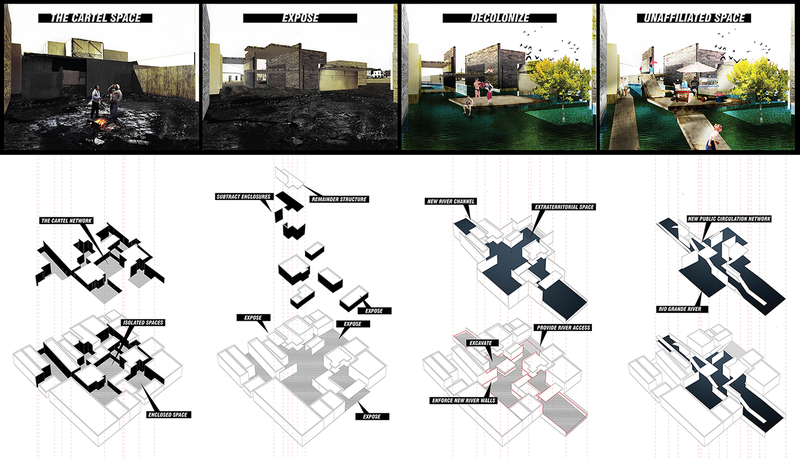 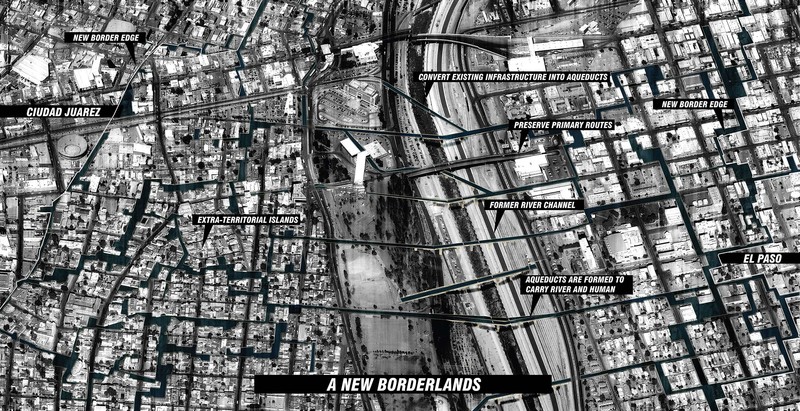 The scene of a new border condition. A region no longer objectified by geopolitics - as the river subtracts the cartel's colonization it now forges a new connection between the once divided cities.

Such transformation will allow the communities a new form of public space capitalizing on the rivers power to be politically unaffiliated.

Subtraction is the architectural act cloaked with immense power to eliminate the cities negative spaces. This will allow for a new representation of the two cities. 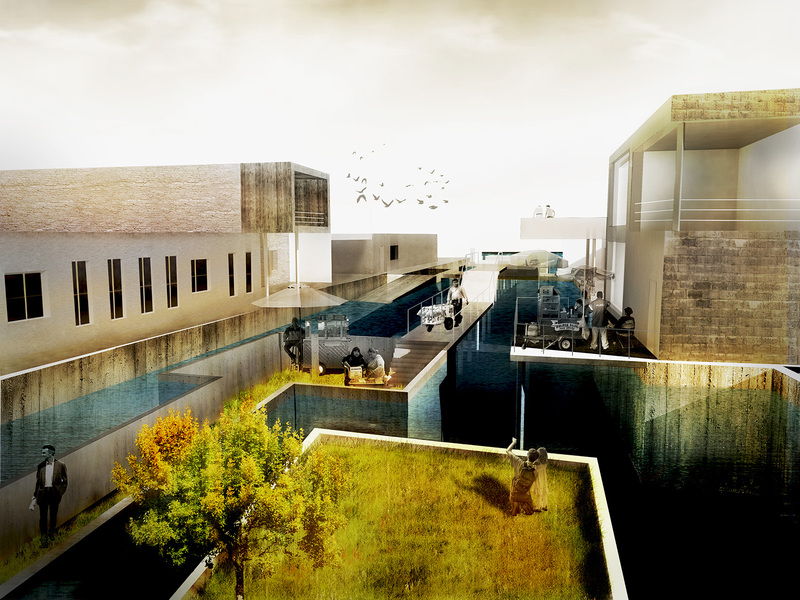 Structures and communities surrounding and engulfed by the river will undoubtedly reorient their homes and business to facilitate a new public. Economically enriching programs such as market spaces and live/work communities will reactivate new exchanges. 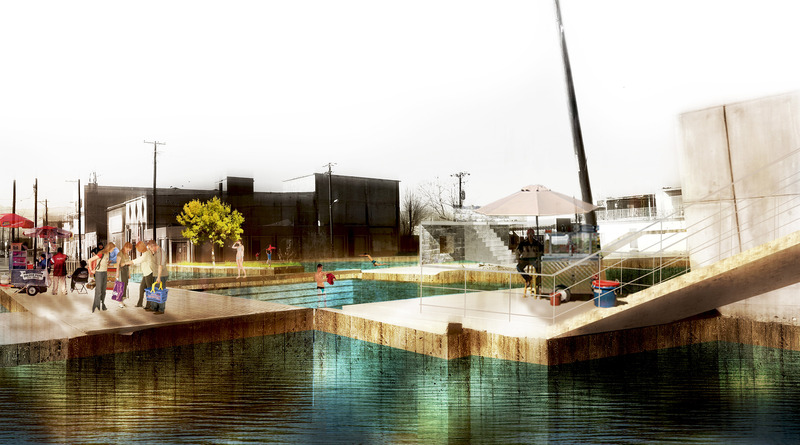 The new borderlands will enable a new occupation for citizens of either country in a space desaturated of political subjectivity.