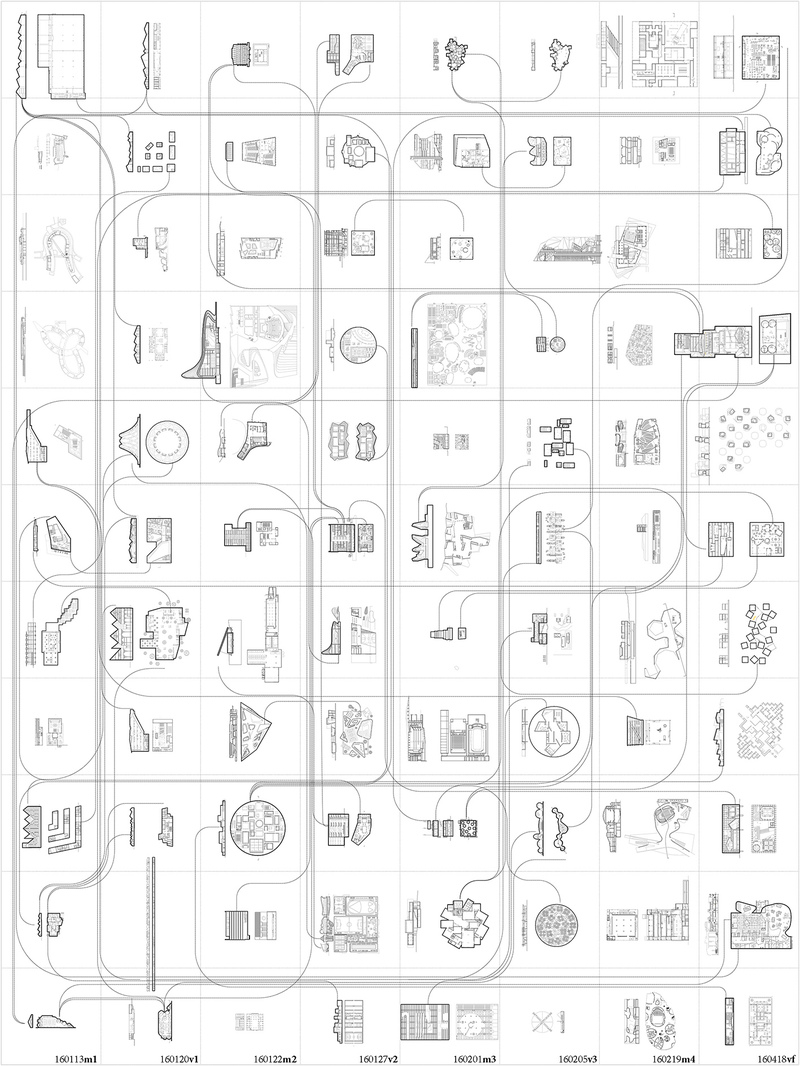 Matrix of source material, interactions, appropriations and evolution of the projects produced in the experiment.

In a short passage of Interpretazione e sovrainterpretazione, a fascinating book that includes an analysis of the reception and interpretation of his own work by other scholars, Umberto Eco narrates how, some years after having written it, he discovered that the description of the second volume of Aristotle´s Poetics that appears in The Name of the Rose was in fact the description of an old manuscript he had kept in his library for nearly twenty years, and which he had completely forgotten. Without knowing, the sentences he drafted in his debut novel were in reality a depiction of the image of that old manuscript -a memory that remained deeply hidden in his mind until it reemerged years later as an original idea.

This case of unconscious recollection is known in the field of psychology as “cryptomnesia”: the appearance in consciousness of memory images that are not recognized as such but appear instead as original creations, framing the way in which we shape our thoughts and construct new ideas. Following Eco’s path, we could argue that it is in the realm of cryptomnesia where the experiences we live, the objects we see, the words we read, blur their contours and become malleable to the interaction of other memory images in order to breed original thoughts. The thicker this repository of forgotten memories, the richer the potential of any creator, including architects, to produce new ideas.

Interestingly enough, the growing omnipresence of imagery derived from the emergence of digital media in the last decades seems to be shattering this potential. Constantly exposed to the tidal wave of information that characterizes our time, it has become more and more complicated for contemporary creators to forget, i.e., to process memories and to avoid their identification with any of the myriad images that circulate in front of our eyes on a daily basis. Outside the domains of cryptomnesia, these images remain immune to the transformative power of oblivion and, paradoxically, their accelerated availability is limiting creativity on a global scale.

We can either lament this situation or take it as a contemporary condition. We´ll choose the latter.

The fall of cryptomnesia brings to the fore a number of creative strategies that stray from individual intuition and turn the manipulation of existing images and cultural products into an open, collective endeavor. By externalizing the collisions that used to take place in the hidden areas of our minds, these strategies assume that innovation and appropriation are no longer antinomic in the era of information and seek for originality in the unpredictable interactions of available material that occur in the space of collective intelligence.

Elaborating on this idea from an architectural perspective, this paper investigates the potential synergies between appropriation and collective design, and argues that the sharing of existing architectural documents -images and drawings- might lay the foundation for a design methodology that, similar to the one put forth by the open-source movement, is able to produce originality in a moment when the excess of information is rapidly redefining the way we design.

The argument will begin with a discussion of the concept of cryptomnesia in direct relation to authorial models dominant in modern culture, followed by an assessment of the impact that information and communication technologies have on the emergency of alternative approaches to authorship and ideation. In this scenario, the relevance of sharing as a design methodology will then be discussed and illustrated through a pedagogical experiment conducted by the author at Rice University in 2017, in which the projects were developed by the students following a collective process of activation and manipulation of shared architectural documents. Images and drawings of the experiment to follow.