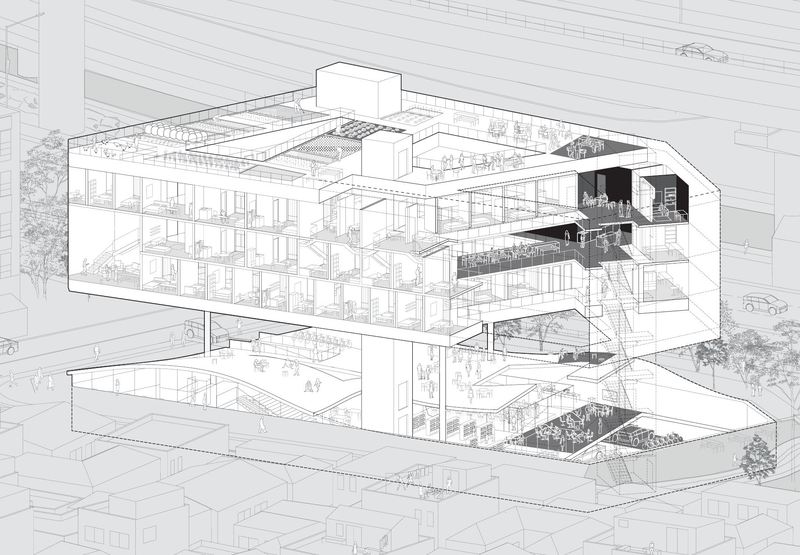 Living unit, dispersed, connected, and supported: Going beyond the spaces of minimal comfort or limited internalized interactions, the project imagines the new concept of a basic living unit that is tightly connected to and supported by the city. Distributed, stretched, and flexibly overlapped with one another throughout the building and the site, the concept of unit of the new home encompasses the basis for a long term impact (provision of spaces and programs for learning and working), plans for exchange and collaboration (integration of public amenities and forums), and the strategies of implementation (use of public land and preservation of previous use). Creating an important intersection with the surrounding publics as well as the larger networks within the city, the proposed unit as an example of a new basic cell of future housing attempts to reconnect the urban and the civic.

The Wolgok Youth Platform is an experimental youth housing project initiated by Habitat for Humanity Korea and the SeongBuk-Gu - a local government of Seoul. Due to the high cost of living and a competitive job market, the youths of Seoul represents one of its most under-supported demographic segments. 23% of the youths in Korea between age 20 and 34 live in makeshift, below standard informal homes, such as the Ji-Ha-Shil (basement), Ok-Top-Bang (rooftop additions), or Go-Shi-Bang (modified study carrels). A coincidental but appropriate acronym “Ji-Ok-Go,” roughly translated as “hell-like suffering,” reflects the hard-to-overcome circumstances that youths from low-income families face in the cities like Seoul where cycles of inherited poverty are perpetuated by the lack of housing options in their formative years.

Combining homes for underprivileged youths, their job platforms, and new public spaces, on a city owned lot, the project explores the notion of openness and sharing in collective housing typologies beyond the limitations of the highly commodified “A-Pa-Tu” complexes of Seoul and its more trendy alternative of interest group driven co-living collectives. The Platform frames an expanded notion of home that, while preserving individuality and intimacy, is open and tightly connected to and supported by collective operations of multiple scales in the city.

In recent years, the myth of a universal unit of home and its mismatch to the needs of contemporary demographics, and both historical and contemporary formats of collective or shared dwelling have been widely discussed. While these rising interests point to a direction beyond the mindless reproduction of conventional typologies, remarkably internalized realms of highly choreographed commercial co-living enterprises or frailing realities of under-supported public pilots only accentuate the disparities and shortcomings in the existing housing policy and market.

In imagining new prototype homes for low-income youths, the project posits the possibility of a transitional household that is flexibly distributed yet decidedly connective and transformative. Challenging the idea of home as a self-sufficient enclosure, the new homes, dispersed, stretched, and overlapped with one another throughout the building and the site, create important intersections with new public spaces and other networks within the city. In addition to the personal living spaces and areas shared with peers with varying choices of repose and interaction, the critical spaces for work in the ground level are combined with much needed neighborhood functions such as multi-purpose venues, classrooms, and a branch library, and become the key infrastructure for the collaboration between the residents, the neighborhood, and the city at large. The new public plaza above, transformed from a municipal surface parking lot, becomes a welcome open space for the youths and the neighborhood alike.

The project provides underprivileged youths of Seoul with a much needed spatial basis to foster their own stability and growth while instigating a renewed relationship between the city and its inhabitants. Actively framing new formats of living and expanded scales of sharing, the Wolgok Youth Platform posits the possibility of “co-living” the city, where rights to the city of the less privileged are leveraged alongside the necessities of the larger public. 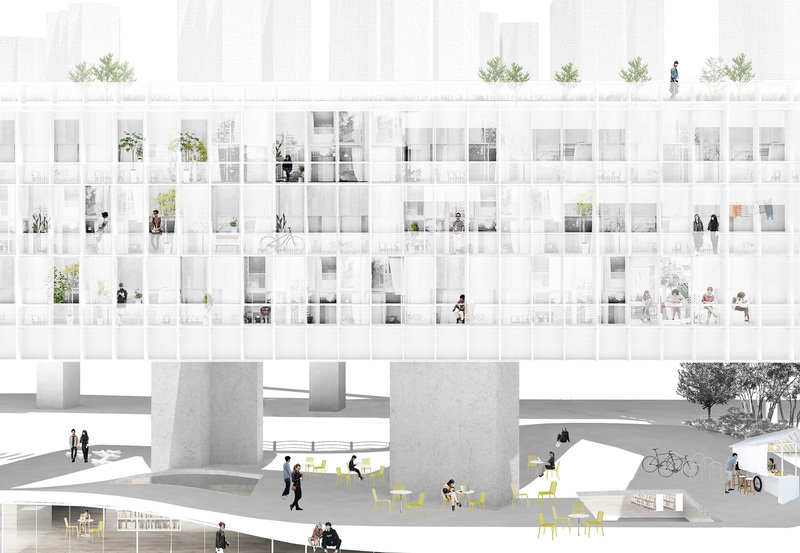 View from north east: The public realm on the street level and below is open to the residents as well as the rest of the city. Connected with the open courtyards of the living spaces and continuous with a diverse system of networks around the site, the space produces a new type of flexible infrastructure where the closed communal spaces usually found in the typical collective housing in Seoul open up to the city and the public amenity in turn becomes the critical and integral part of the residents’ daily life. 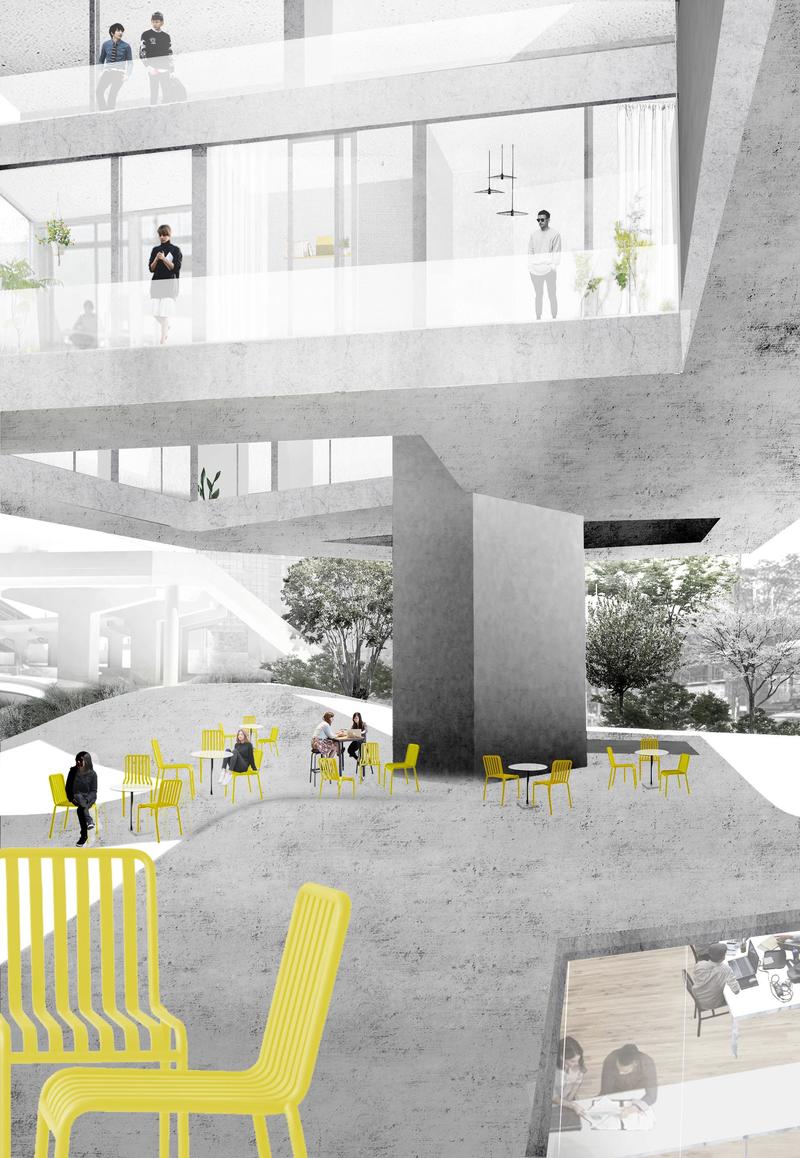 View from one of the three open courtyards: the space vertically connects the private rooms and shared communal living amenities (above), a new public park (street level), and a new branch library and work space for the youth residents and the public (below). 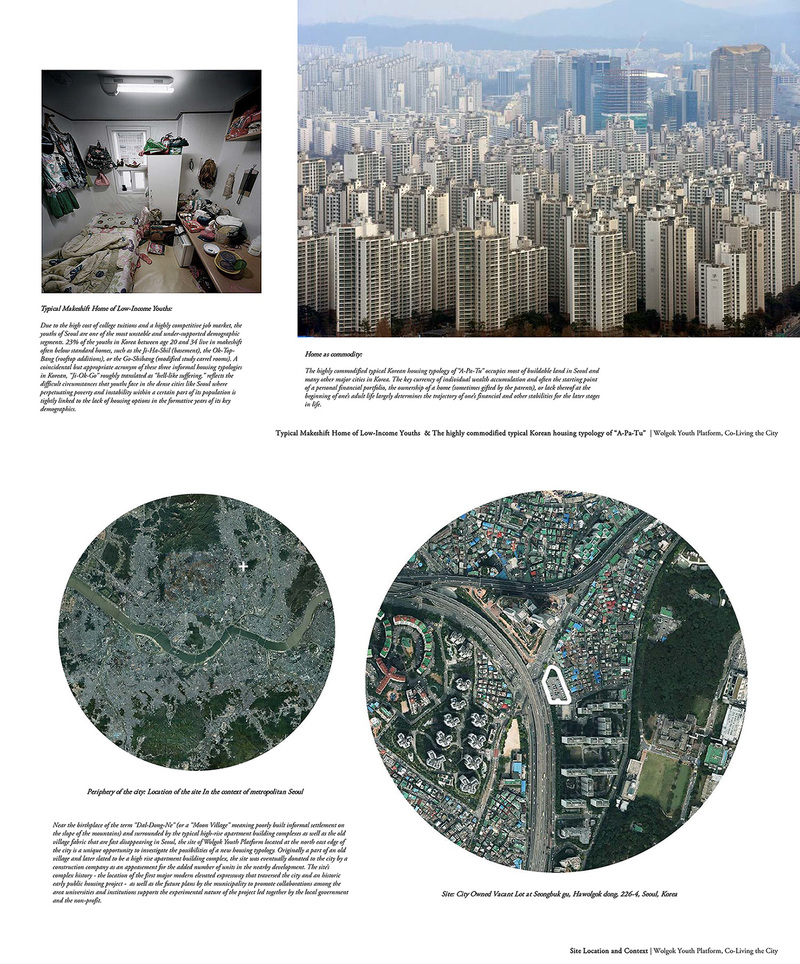 Project Context: Typical Makeshift homes of low-income youth; The highly commodified typical Korean housing typology "A-Pa-Tu"; Site at the periphery of the city; and the site location at the city-owned surface parking lot surrounded by dense and diverse housing fabric. 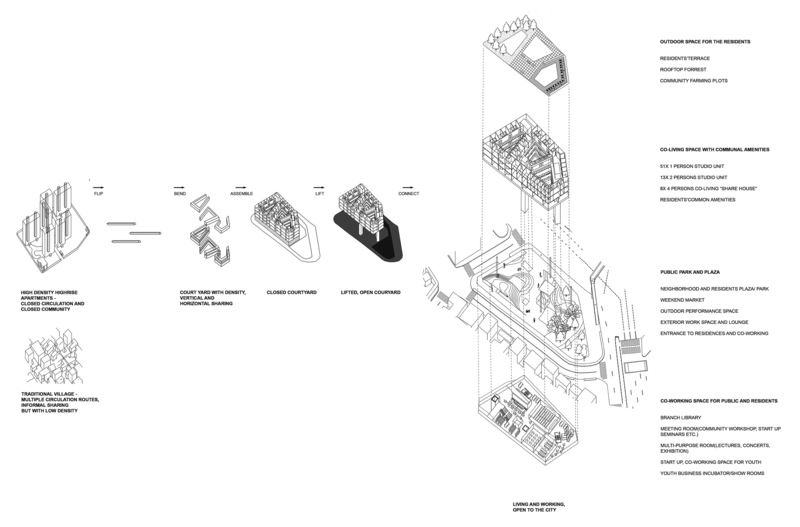 New collective form / Open homes: The project aims to mediate two prevalent housing typologies - vertical high rise apartment complexes and horizontal villages of old houses- found around the site. The merits of the two typologies usually discussed as uncompromisable opposites are combined and transformed into a new form that affords the desired density as well as the intimacy and openness. 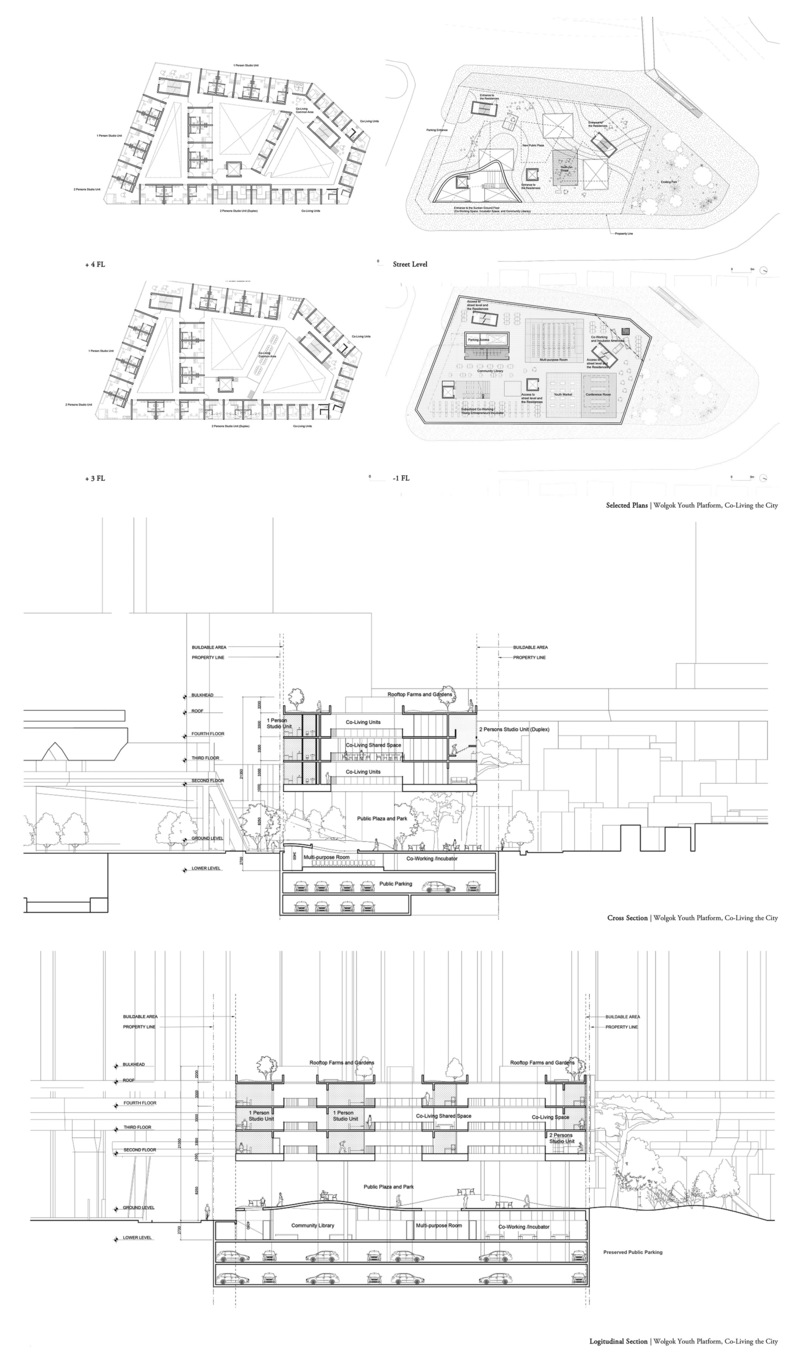 The overall massing aims to establish an experientially intimate and yet iconic scale, which articulates the presence of the new collective living in a legible form in the urban context. The relocation of the public parking underground enables the donation of the site by the municipality while reestablishing the continuity of the street and the ground as a public space. Three assembled courtyards and dispersed shared amenities modulates and diversifies the scales and possible degrees of interactions among the residents.

Living and Working, Open to the City 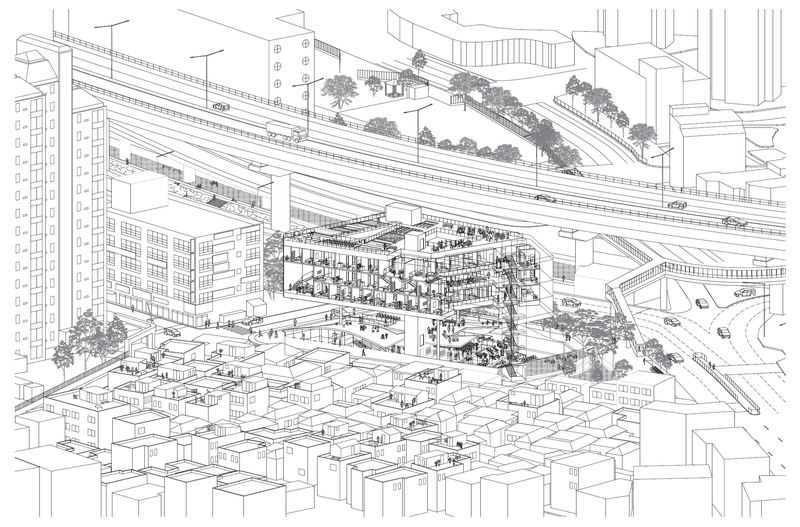 Co-living the city: Wolgok Youth Platform in the context of its neighbors-typical high rise apartment buildings, old fabric village of low rise houses, podium and tower luxury development, and historic expressway infrastructure. The project posits the possibility of a more supportive and transformative architecture of habitation that allows for a more equitable coexistence in the city.