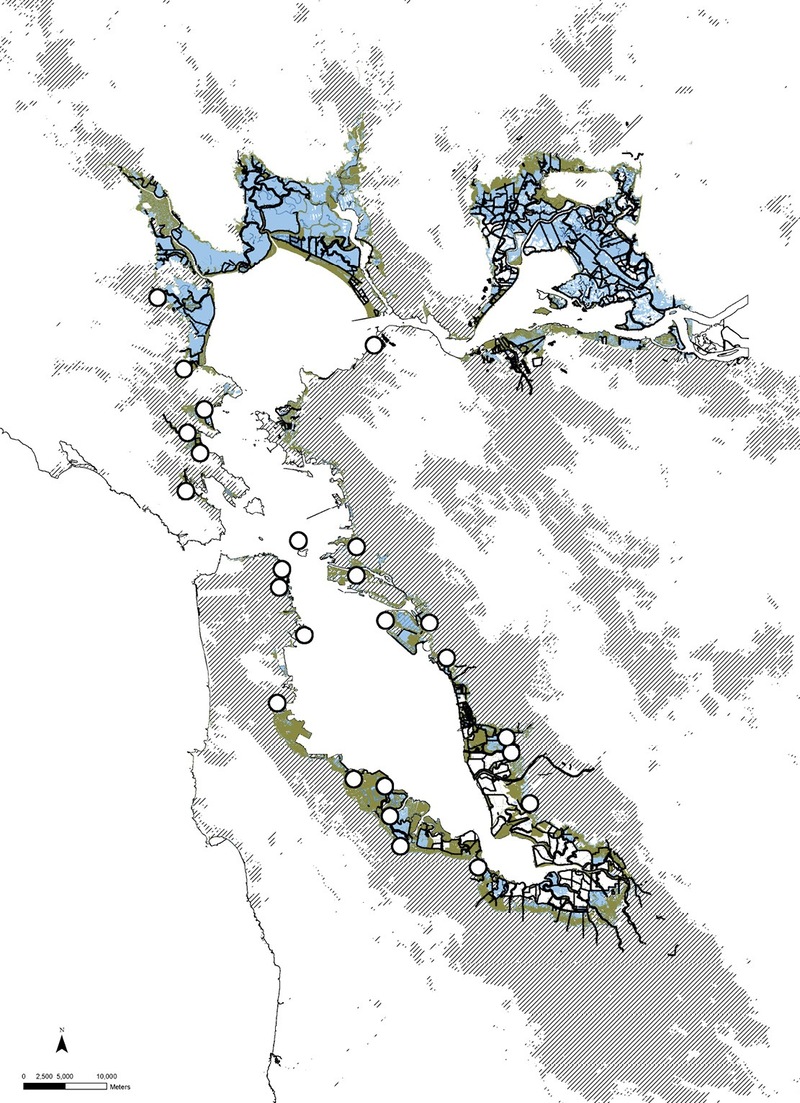 By Gabriel Kaprielian and Carlos Sandoval

Waterfront cities around the world face shared issues related to climate change and sea-level rise. This perceived threat is mainly postulated on the inflexibility of static urban coastlines and their inability to adapt to changing environmental conditions. The coast, by its nature, is not a fixed line, but a transition zone from water to dry land that is in constant flux. If we reframe the problems associated with sea-level rise as an opportunity to re-envision the relationships of the built and natural environment along the shoreline, we can begin to create innovative design solutions that actively make a co-habitation space for ecological systems to actively shape new city form.

The urban edge that defines the San Francisco Bay is a contested landscape whose boundaries are continually changing, both in form and in definition. Much like the tidal flux of the Bay wetlands, the urbanized waterfront can extend and recede. Over the years, the Bay Area has seen a large portion of the historic wetlands filled or leveed off for residential, commercial, and industrial land uses. With current sea-level rise projections, it appears that the water will once again reclaim the bay lands that have been filled. This project seeks an approach to waterfront adaptation to sea-level rise that creates a shared space with the coastal ecosystem, ultimately redefining the boundary of the urban edge.

To combat sea-level rise, there are calls for greater shoreline protection, while still others claim that urban development in areas at risk of inundation should be removed to allow for tidal wetlands to migrate to higher elevations with the rising sea levels. Waterfront Ecologies proposes that both may be accomplished by a staged retreat of existing development, enabling a wetland migration, while introducing a resilient new development and infrastructure that is uniquely defined by the region’s ecological characteristics. This proposal blurs the lines between the shoreline and the city. A proposed new development typology built on “finger” levees and horizontal to tidal action, allows for wetlands to coexist between the buildings and roads, creating native habitat and a buffer against storm surges and flooding.

Urban and ecological conditions, which are in continuous transformation, challenge traditional design methodologies. In order to create resilient urban development systems, we developed a design strategy that utilizes an agent-based simulation informed by ecological, demographic and infrastructure data, that identifies the areas of the landscape most suitable for building, while leaving the rest open for a functioning tidal habitat. The result is a porous waterfront that enables a new set of relationships between urban life and ecology, forging a stronger shared future together. 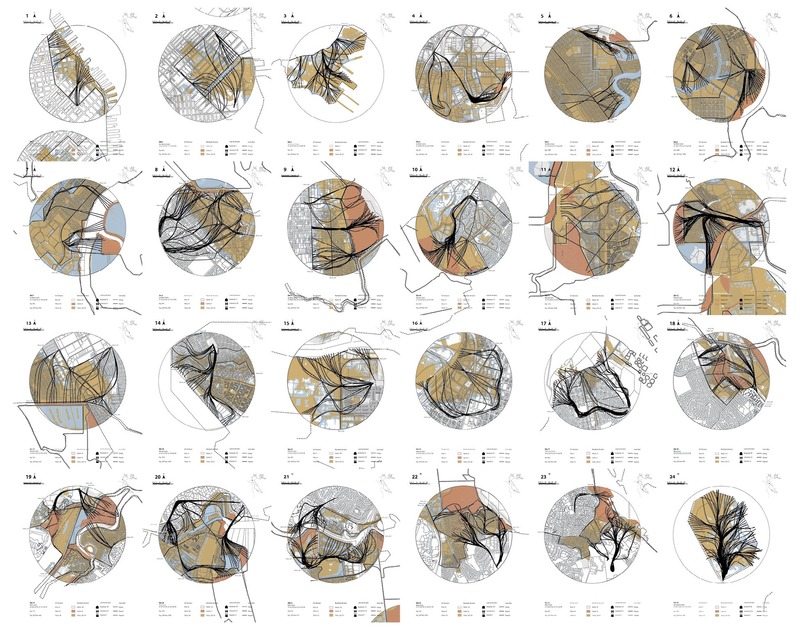 Each Composite Site Maps illustrate the outcome of integrating GIS data with a parametric design process. This involved the creation of an “agent-based” suitability model simulating sea-level rise and wetland growth patterns. The resulting agent paths represent the most suitable location for redevelopment to coexist alongside tidal wetlands and connect with existing urban infrastructure. 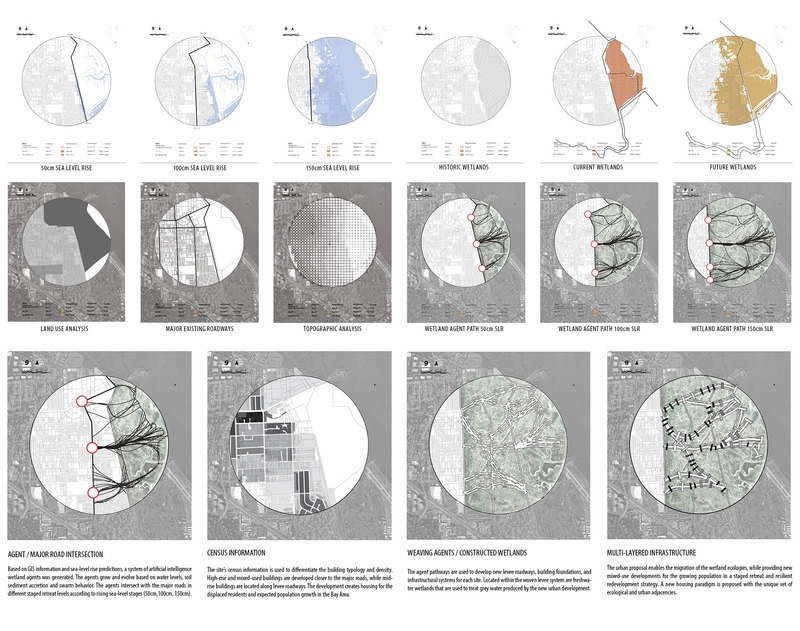 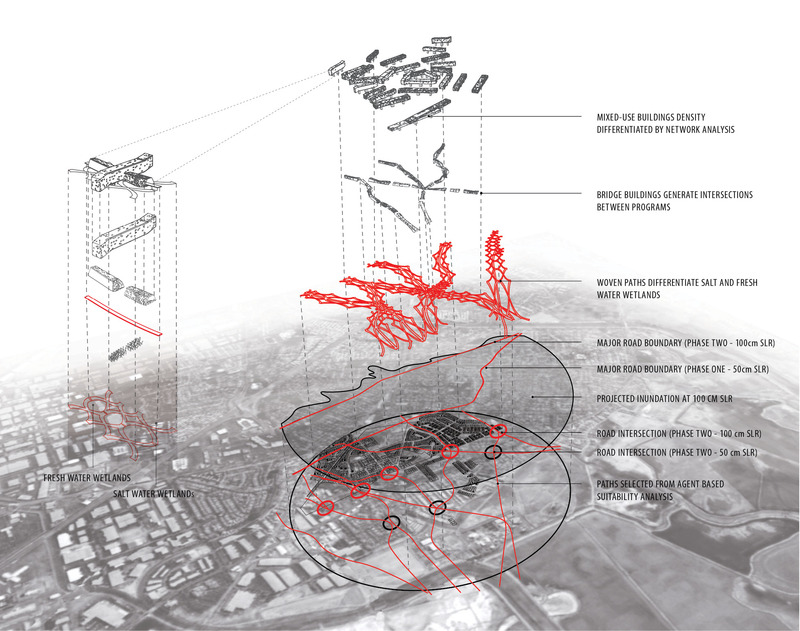 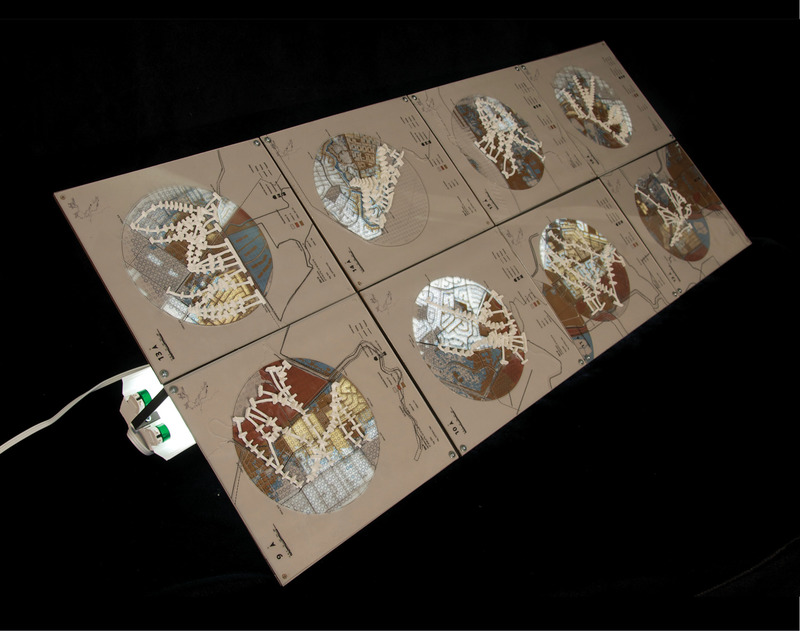 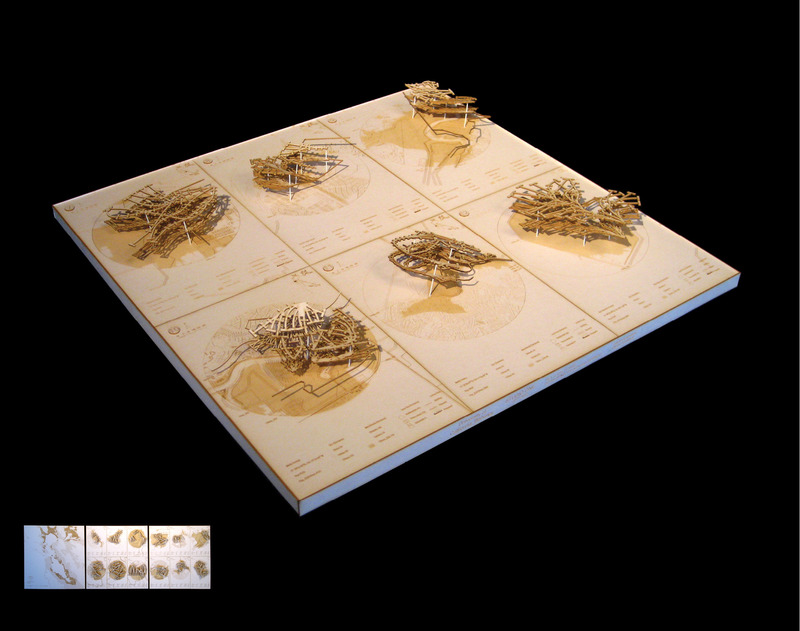 Physical Model created for the Venice Biennale of Architecture.