“We are at the threshold of a new era of urban transport.” With this provocative statement and the grandiose title “Reinventing the Automobile”, Mitchell, Borroni-Bird, and Burns unraveled in their book a fascinating vision for urban mobility. Shared fleets of compact, robotic, electric vehicles, placed strategically at networks of recharging stations, allow citizens to move ubiquitously, independently, and on demand. On top of this physical infrastructure, an intelligent layer of sensors, communication protocols, and personal devices, enables participants to quickly locate vehicle and parking availability. By maintaining an optimal balance of vehicles at stations, the idea is that more citizens can commute with fewer vehicles while cities can reclaim back urban land [1].

The growth of shared mobility is astonishing. With an industry doubling biannually, global fleets accounting 104K (2014) and 14M (2017) cars [2] and bikes [3] respectively, and the first autonomous vehicles (AV) already cruising in streets of Pittsburgh, Singapore, and Silicon Valley, MoD systems are one of the most rapidly growing sectors of urban transport. Yet, the average shared vehicle remains nearly as much idle as a private one while half users complain about vehicle or parking availability. Behind the scenes, an army of trucks, employees, and computer algorithms move continuously vehicles from full to empty locations increasing congestion, energy waste, and carbon emissions. More often than not, this effort is ineffective.

The question I put forward is: Who should be entitled to decide operations in a common of mobility and how should cost be shared among users? Framing the discourse as an institutional design problem [4], [5], I will compare two models of governing commons of mobility: command-and-control and self-governance. In the first (and currently used) model, a commander gathers information from the system and directs dispatches of vehicles from full to empty locations. In the second model, a social mechanism rewards trips from full empty locations while penalizing trips the other way around. I will compare models based on their capacity to utilize resources and share cost among users in ways that reflect their trip valuations.

First, I will argue that command-and-control fails to allocate cost of mobility in a socially optimal manner because by controlling how vehicles navigate, it prioritizes users’ options in ways that ignore their personal valuations of time. As a result, while for some users sharing is worthier than not sharing, for others it is not. Second, I will argue that self-governance has a potential of maximizing resource utilization and of allocating cost in a socially optimal manner, since for each trip pattern, there can be a set of trip prices that reflect users’ valuations of time. I will discuss a social mechanism that in theory achieves this objective: users buy/sell vehicle rights from/to origin/destination locations at prices emerging from mutual competition; similarly to a stock market, trip values derive as transactional differences between buying and selling, and can be positive, negative, or zero. Mutual competition brings the system in equilibrium relocating resources from users willing to pay to save time to users willing to profit from spare time. I will conclude by discussing implications in the future of shared mobility.

Outline (3,500 words)
1. The Vision of Shared Mobility (800 words)
I will overview past, present, and future discussions on sharing in on-demand urban mobility systems, presenting the discourse as (i) a vision from Mitchell et al., (ii) an existing reality, (iii) futuristic trends, (iv) as a tragedy of commons, and (v) as an institutional design problem from a political economy perspective.
2. Command and Control (850 words)
Bringing examples from bike sharing, car sharing, autonomous drone/vehicle services, I will discuss limitations and failures of command-and-control model in shared public transit systems, critiquing its performance in utilizing recourses and in allocating cost in a socially equitable manner.
3. Self-Governance (850 words)
Similarly, I will discuss the potential of self-governance and basic conditions that must be met in order to govern commons from a collective action and a social mechanism design perspective.
4. The Market Economy of Trips (500 words)
I will discuss an example of pricing mechanism design (based on a two-sided market) that in principle can achieve a Pareto-optimal allocation.
5. Governing the Commons of Mobility (500 words)
I will conclude with a critical discourse on the future of sharing in on-demand urban mobility systems.

Command and control system in bike sharing systems today. The operator's control room with monitors overviewing the state of the system in real time and providing instructions to trucks for dispatching bikes from full to empty locations 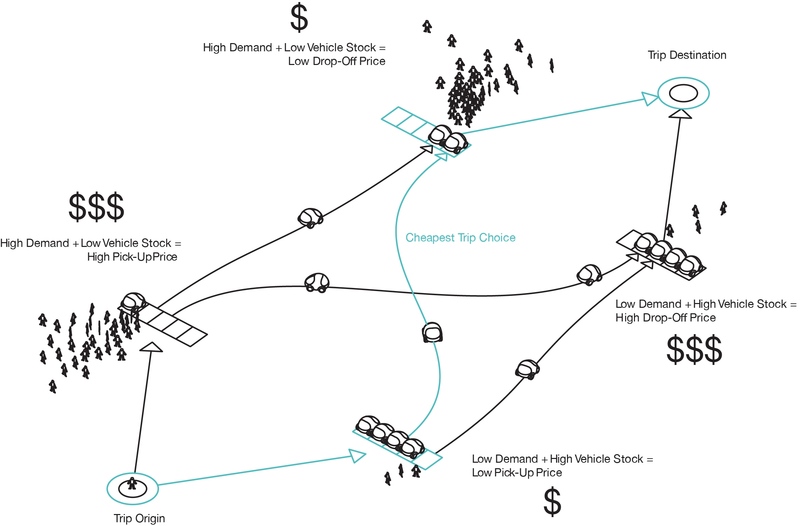 The Market Economy of Trips: a self-governance operation model based on a two-sided market that prices trips relatively to inventory needs in origin and destination locations. Users buy trip rights from origin stations and resell them back at destination stations

User interface for the Market Economy of Trips. Colored areas indicate pick up and drop off bid prices from stations. Moving from green to red areas asks users to pay while moving from red to green areas pays users back.